Read more about AI students and their projects.

Follow the lab on social media for the latest news.

A group of graduate students gathered in UNT’s Biomedical Artificial Intelligence Lab at Discovery Park back in Spring 2020, setting up their laptops at various tables scattered throughout the room. Those small screens, it turns out, held some big ideas.

The men and women, who mainly hailed from UNT’s computer science and engineering program, were involved in projects ranging from using efficient coding to understand neural processing in the early visual and auditory systems to real-time tumor tracking for radiation oncology. That day, they were showcasing their work as part of an open house hosted by Mark Albert — an assistant professor of biomedical engineering and computer science and engineering — as a way to demystify AI for other students who might be interested in joining some of the lab’s additional biomedical collaborations.

A semester before, as a first-year computer science and engineering master’s student, Havish Nallapareddy wandered into the inaugural Biomedical AI Lab open house. He’d always been interested in artificial intelligence, and after talking with Albert, Nallapareddy became involved in a project focused on using machine learning to improve fall detection in wearable airbag technology to mitigate falls in individuals who have suffered strokes. Collaborators include researchers from Loyola University Chicago, and the Shirley Ryan Ability Lab and Northwestern University.

Albert, who arrived to UNT from Loyola in 2019, is committed to connecting his students with those types of dynamic opportunities in the realm of AI. And considering UNT this fall became the first university in Texas to launch a Master of Science degree in artificial intelligence, the possibilities are practically endless.

“Students pursuing hot areas like natural language processing and deep learning — if they have the research papers to back up their knowledge — are asking for starting salaries of $150,000,” Albert says.

Using AI for health and safety 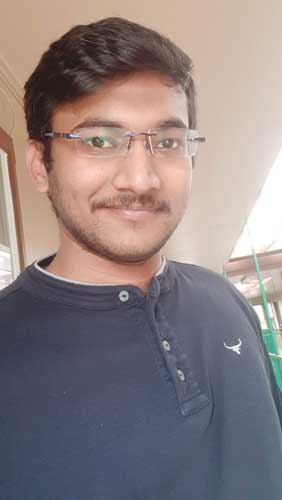 In terms of programming, Nallapareddy has learned different machine learning and deep learning models during the project, and deployed convolutional neural networks — a class of deep neural networks, most commonly applied to analyzing visual imagery — that are part of “the very latest techniques to be implemented on new data,” he says. He’s also learned the importance and intricacies of the work he is performing, which he shared with the students who toured the spring open house. Falls are especially common in those who have had a stroke, occurring in up to 65% of individuals during hospitalization and up to 75% at home — something that inevitably results in a fear of falling, which leads to restricted movement, reduced mobility and social isolation. The airbag is meant to alleviate that fear, but it must be programmed so that false alarms don’t occur. For example, it’s important that the technology can differentiate between an actual fall and a downward motion such as sitting.

“The motivation of the Biomedical AI Lab is to address every physical challenge that humans face,” Nallapareddy says. “With the airbag, it’s not just about fall detection — it’s about giving motivation, encouragement and confidence to people, that there’s a device that can help catch them if they fall.”

This new knowledge has given Nallapareddy a confidence boost too. In October, he presented his findings as part of the Biomedical Engineering Society Conference, and just a few months earlier, took part in the Kaggle COVID-19 Global Forecasting challenge. What started as a project in classes led by Albert and College of Engineering assistant professor Ting Xiao resulted in more than 30 teams of UNT students competing internationally to create the most accurate model of the spread of COVID-19. Nallapareddy was on UNT’s top team, which ranked 26th out of 313 competitors. The competition solidified his desire to make a mark in both artificial intelligence and health — something he’s already doing as he continues his work with the deployable airbags.

“AI and machine learning models are still developing and evolving — if you look at self-driving cars, it’s the same thing,” says Nallapareddy, who is expected to graduate in May 2021. “The key is about gathering more data that can help us improve the models and learn more.”

Akansha Goel is equally invested in using artificial intelligence to better health care outcomes. This spring, she traveled from her native India — where she graduated with a Bachelor of Technology in computer science from Meerut Institute of Engineering and Technology and worked as an associate system engineer for IBM — to enroll in UNT’s AI master’s program. She was curious about how machines replicate human decision-making processes, from autonomous driving to helping doctors evaluate treatment options.

“By training machines to do some of these tasks,” Goel says, “then humankind can invest our creative minds in learning and creating something new.”

So far, Goel has worked on two projects in the Biomedical AI Lab. Beginning in Spring 2020, she led a research effort that involved creating a visual dashboard system to reduce excessive sound exposure during music instruction.

“We created this dashboard to indicate to students and instructors that their exposure to high music frequencies and intensity might lead to hearing damage,” she says. “If they exceed critical exposure levels, the dashboard shows them that by changing color.”

Now, Goel is a member of an electrocardiogram vest team that uses predictive modeling to identify features of cardiac arrhythmias in an ECG vest created by UNT electrical engineering faculty and students. As part of the project, Goel uses ECG data to predict if a patient is potentially at risk for cardiac arrythmias. Other predictive projects also have been undertaken by students in the Biomedical AI Lab, including a collaboration with the Shriners Hospital for Children in which Nallapareddy and Ph.D. student Steve Wang use data to predict surgical outcomes of children with cerebral palsy to inform long-term walking outcomes.

“If we are able to forecast medical problems that might occur in our bodies,” Goel says, “or the circumstances that might lead to those problems, that is a really big achievement.”

Goel aims to work in the biomedical AI field after she graduates, and specifically hopes to delve more into the areas of machine learning and image recognition. The hands-on opportunities the AI program provides, she says, are helping to make that goal a reality.

“The program has been really helpful in gaining practical experience from the industrial point of view,” she says. “The course curriculum is more project-oriented, which gives a way to apply the knowledge learned in class to real life.”