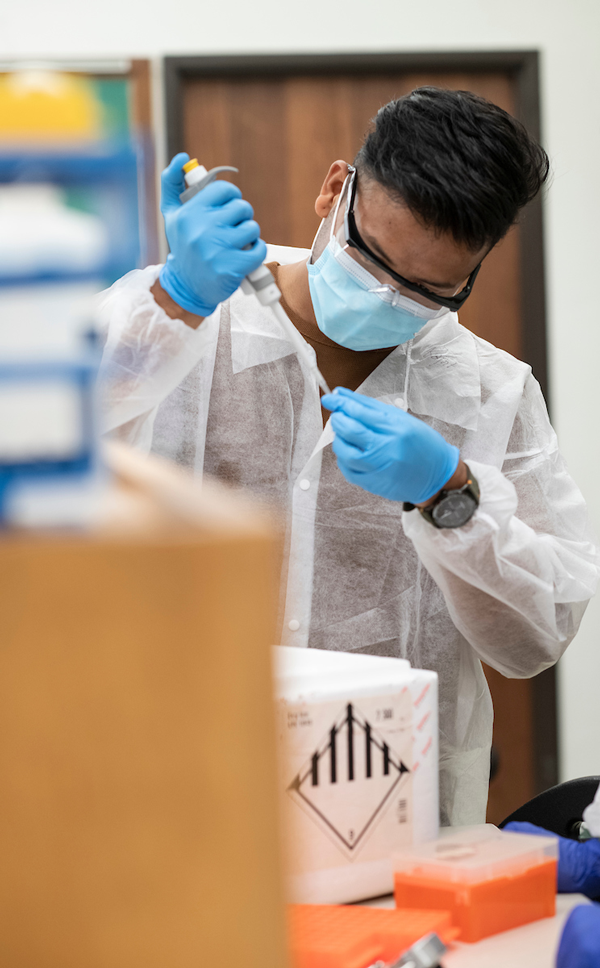 Researchers at UNT’s BioDiscovery Institute are studying how plants talk to their microbial neighbors. It’s a question that could have broad impacts for agriculture and basic science as well.

“Plants obviously don’t speak like we do, but they still need to communicate,” says Kent Chapman, director of the institute and Regents Professor of plant biochemistry. “They communicate with their environment, including all of the microorganisms that are in the soil and on the surface of plants.”

Chapman and Mina Aziz, research assistant professor of biological sciences, have received a $1 million grant from the National Science Foundation to look into this communication process  — and the small molecules involved — used by plants and microorganisms to communicate. The researchers hope to discover how these fatty acid amide hydrolases (FAAHs) participate.

“We’ve identified a new group of enzymes,” Aziz says. “We don’t have much information about what they do to facilitate communication — what is their impact on plant health.”

Related enzymes are involved in lipid signaling in plants, and Chapman and Aziz believe FAAHs may be involved in chemical signaling between plants and microorganisms in many fundamental ways. They authored a paper in Trends in Plant Science in 2020 describing FAAH’s role in chemical communication that was considered an opinion paper because the idea was so new. Aziz solved the crystal structure of one protein family member, the Arabidopsis thaliana FAAH, which enabled them to conduct the research they are pursuing with the NSF grant.

“This is a real achievement by Dr. Aziz — to actually solve a crystal structure of a protein,” Chapman says. “This is actually what gives you a three-dimensional model — or an atomic-scale model of a protein — where all the atoms are, what the atoms interacts with, where the substrate binds and where the catalysis takes place. You can’t really know any of that definitively until you get the crystal structure. There is no other example in the plant kingdom for a FAAH family member structure, so it was a real landmark.”

Chapman and Aziz are looking at the fundamental process for small molecule communication. The concept of small molecules communicating with plants is not new Chapman says, but the identity of these chemicals and a description of the plant genes involved is not well known. The involvement of how plant enzymes might participate in this process is also less well studied.

“The process ultimately could be applicable to tree roots and soil fungi,” Chapman says. “And it could be involved in the communication between legumes, like soybean plants or pea plants, and soil microbes. Legumes form nodules on their roots, which are inhabited by bacteria that actually provide the plant with a source of nitrogen.”

The same chemical communication process could also be involved in harmful processes like the signals that allow pathogens to attack plants.

The research started with a model plant called Arabidopsis that is primarily used in research. The NSF grant will allow Chapman and Aziz to expand to crop plants including soybeans and cotton.

“Texas is the largest cotton producer in the country, which is important to the Texas economy,” Chapman says. “Understanding these enzymes and the microbes that influence cotton growth and yield could be very beneficial. Down the road this information could form the basis for crop improvement, not by genetically modifying the crop itself, but understanding the communication so that we can influence the crop health in the field.”

One could envision how this might lead to additives to make crops healthier or fight off disease. Beneficial organisms could enhance nutrient uptake or stimulate plant growth within the plant to enhance crop yield. Other additives might interfere with disease-causing organisms and their communication, so that they don’t infect the crop plants.

“Just like you might go the grocery store and buy a probiotic beverage to resupply your gut microbiome, these would be products that are meant to improve soil health and crop health.” Chapman says. “This is a very hot area in agriculture right now. There are companies that are starting up to develop these biotic additives that they add to soil.”

Understanding the enzymes and the fundamental chemical signaling process also could lead to a greater understanding of chemical communications in other species as well.

“We know that there are major structural differences between the crystal structure we solved from Arabidopsis thaliana, a member of what we call group I FAAHs — and the animal FAAHs — e.g., rat and human FAAHs, but here we discovered a new group of FAAH enzymes in plants named group II that has predicted structural and functional differences from group I enzymes,” Aziz adds. “Do animals have similar enzymes to group II FAAHs? Do FAAHs in animals play a role in communication with micro-organisms?”

Part of broader impact of the grant is the undergraduate research class that accompanies it, Biology 3900, Advanced Research in Life Sciences. Students in the class will be participating in the project. The intention is to bring a whole class of undergraduates into an actual research experience — from beginning to end — from reading the literature, to developing hypotheses, to conducting the research experiments, interpreting the results, presenting those results and writing a research paper.

“None of the information is known. We don’t know what’s going to happen. It’s the thrill of discovery and frustration of defeat that goes along with science and research,” Chapman says. “Students learn a little bit about when things go wrong how to troubleshoot. And when things go right, they’re feeling just as proud as I am about the outcome.”

The NSF grant also supports a Ph.D. student, Omar Arias Gaguancela, and a research specialist, Emily Herrell, to help lead this course and mentor the undergraduates in this research experience.

Chapman feels the same way about Aziz’s research. The work on FAAH to mediate communication with microbes is an area Chapman might not be exploring were it not for Aziz, who joined his lab in 2014 as a postdoctoral scholar with a chemistry background and has since expanded his expertise to include protein biochemistry.

“Because of his perspective from protein structure studies, he’s sort of taken a tangential direction that I might not have,” Chapman says.

Aziz says that Chapman’s role as a mentor and his willingness to allow Aziz to co-write the research proposal is what has made the difference, encouraging the researchers in his lab to do their own independent thinking.

“With my limited experience, I could have thought of this idea and put it on the back burner for a while, but he kept pushing forward,” Aziz says. “Dr. Chapman encouraged me to write the proposal with him and be a co-PI with him on the research proposal.”

Although there is only one principal investigator for NSF, Chapman says he thinks of them as a team with Aziz providing leadership to this project.

“There are not many postdocs who move to this level,” Chapman says. “That million dollars will pay for all the research objectives and training to get done, but the career development that has taken place here also is important. Dr. Aziz is going to be famous one day.”