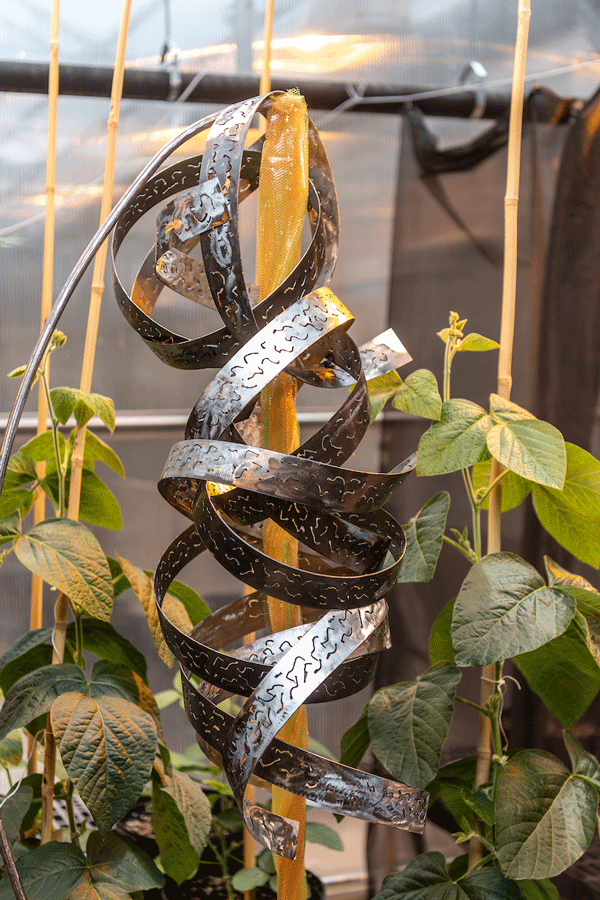 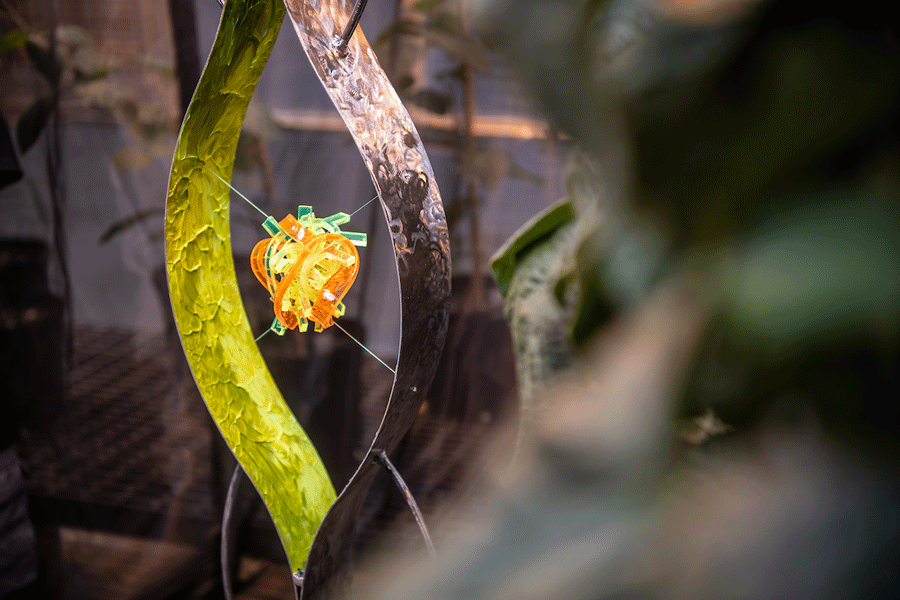 Phil Samson has been pouring over scientific research papers from scholars in UNT’s College of Science lately.

Though the studio art graduate student in the College of Visual Arts and Design has no background in science, he’s found the research to be quite an artistic muse.

His own attempts at planting a pandemic garden in his backyard last year and experience helping relatives during the summer on their family farms in Nebraska fueled his interest in plant science and questioning about the purpose of gene modification. First, he shaped sculptures to resemble maize and soy beans, some of the first crops to be genetically modified by humans, as well as a flower altered to glow in near-UV light conditions.

“I called this series ‘GMO non OMG,’ as a reference to science having significant influence over plants’ development more so than naturally-occurring mutations,” Samson says.

At the encouraging of faculty members on his M.F.A. thesis committee, Samson reached out to UNT botanists like Kent Chapman and Richard Dixon in the BioDiscovery Institute to understand current research in the field.

“He diligently examined how UNT’s botanists are organizing their studies of plant processes,” says Jennifer Way, professor of art history and a member of Samson’s thesis committee. “Subsequently, and without reducing his work to science illustrations, he managed to dialogue its materials, content, appearance and action with key examples.”

Samson’s readings of UNT plant research spurred striking fluorescent sculptures shaped from acrylic plastic, steel, resin and other materials. Some offer a clear representation while others depict parts of the plant research process in a more abstract way.

In Miracle Grow, Samson took inspiration from the model plants, Brachypodium distachyon and Arabidopsis thaliana, which are used by UNT researchers in their studies. The sculpture displays rows of these plants in brightly-hued acrylic plastic on a stainless-steel shelving unit similar to ones used in the Discovery Park greenhouse. They are illuminated by UV light as a nod to the role UV light helps researchers better examine their plant subjects. The green acrylic plastic sculpture, In the Flow, takes an abstract look at a xylem vessel, which help transport water and nutrients within plants.

“The research at BDI has caused me to think about plants as factories, as circuit boards, as finely-tuned engines and much more,” Samson says.

Some of his pieces have found a home in UNT’s BioDiscovery Institute where they have added much more than aesthetics.

“The pieces on loan from Phil have generated a lot of buzz among our research groups,” says Kent Chapman, director of the BioDiscovery Institute and Regents Professor of biochemistry. “Phil works at the interface between art and science, and brings a refreshing new perspective to research activities of BDI members.”

Samson’s nearly three-decade career as a governance, risk and compliance principal at PricewaterhouseCoopers instilled him with an insatiable curiosity. Through that work, he helped multinational companies from casinos to chemical manufacturers improve their business continuity programs.

“I have a background in being able to sift through very detailed information and discover more about it,” Samson says. “If I had to provide services to a client, I had to learn everything they did so I could be a better consultant.”

In his retirement, Samson, a UNT scholarship donor, is pursuing an education in studio art at UNT and devoting more time to his art, which he previously only did in his spare time. He knew the UNT campus from his children who are alumni – Jordan (’16), Jose Moran (’17) and Monica Moran (’16). His wife, Monica, serves on the College of Visual Arts and Design Advancement Board. And they fund the Samson Family Studio Arts Scholarships.

“I have this innate need to create, communicate to people and explore important topics,” Samson says.

Samson hopes his work serves as an example and springboard for further project collaborations between art and science disciplines at UNT in the future similar to the cross-disciplinary work that brought modernization to Florence, Italy during the Renaissance period.

“I think a healthy dose of creativity can spark a ton of innovation,” Samson says. “By creating some of those sparks deep within the mind and bringing together ideas and disciplines that weren’t previously connected, that can ultimately help society.”