Looking for the Magic in Mushrooms

Looking for the Magic in Mushrooms

Home Research News Looking for the Magic in Mushrooms 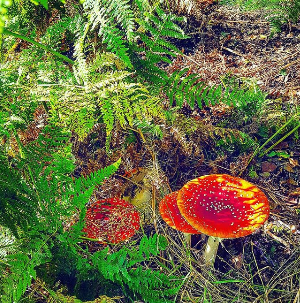 Assistant Professor Elizabeth Skellam recently joined UNT’s Chemistry department where she will teach organic chemistry and courses focusing on spectrometric identification of organic compounds. She accepted the position and planned to start at the beginning of Fall 2020, but due to COVID-19 restrictions, getting to the U.S. took a little longer than she expected.

“I chose UNT because it’s so diverse, and there are a lot of first-generation students from minority groups that are often overlooked,” Skellam says. “UNT has a lot to offer to everybody.”

Prior to her position at UNT, she spent six years researching in Germany as a postdoctoral scholar at Gottfried Wilhelm Leibniz Universitat in Hanover. Due to the pandemic, the transition to America took longer than expected. She quarantined for two weeks in Bulgaria, left for the U.S. Nov. 1, 2020, then quarantined for two additional weeks.

While she waited in Europe, she applied for and received a substantial National Science Foundation grant, which is helping get her laboratory up and running. Having written her grant during the summer, she didn’t find out she’d won until January.

“That was like six months of absolute chaos,” Skellam says. “I just want to express how grateful I am to UNT for helping me get here in the middle of the pandemic. I really appreciate the opportunity and support.”

Throughout school, Skellam wasn’t quite sure what career path she wanted to take. In the United Kingdom, the educational system requires that you specialize in an area of study at 16, so Skellam chose chemistry, which she became incredibly interested in. She went on to receive her masters’s degree from Swansea University in chemistry and her Ph.D. from the University of Bristol, where she transitioned to studying biological chemistry. During her undergraduate studies, she researched for three months in Portugal, where she became interested in physical chemistry. Skellam also earned a master’s in business administration from the University of North Carolina.

“While at the University of Bristol, researchers introduced me to students who were looking at how fungi produce toxins, which was something brand new that caught my attention because it’s really important,” Skellam says. “Fungi can only be used if they are safe. To be safe, they must be non-pathogenic and must not produce any toxins that would contaminate applications fungi help create such as beer, cheese and medicine.”

For her current research, Skellam’s lab is using genomics to search for genes that encode enzymes that synthesize small molecules in fungi. This will then help researchers find molecules that perhaps haven’t been discovered but that could potentially be used in crops as natural pesticides or be used to produce medicine, such as the next penicillin.

“We need new medicines; we need new antibiotics. We also could be finding new agrochemicals,” Skellam says. “And what’s really exciting is we don’t know what the molecules are going to do. You could study one strain of fungi for the rest of your life and still find new enzymes, new pathways.”

Skellam is currently setting up her lab by purchasing necessary equipment and recruiting students and hopes to eventually collaborate with UNT’s Health Science Center to do more drug discovery work.

In addition to the NSF grant, Skellam recently was awarded a Bayer Crop Science Grants4Ag Award for her work using fungi as biocontrol agents to protect crops against specific plant pathogens.

“Many important crops such as rice, wheat and corn face substantial contamination by fungal pathogens, leading to enormous losses of food stuffs affecting farmers and consumers alike,” Skellam says. “Methods for preventing crop loss include using genetically modified crops or pesticides, with neither being fully accepted by consumers due to safety concerns. An alternative approach is to use a biocontrol agent that protects crops from pathogens without causing damage to the crops, the environment or the consumer.”

To help grow her research, she is participating in UNT’s Washington D.C. Faculty Fellows Program, a program for young faculty to help them meet funding agencies so that they can obtain resources in order to achieve their goals. Normally, the program meets in person and the fellows would travel to Washington D.C. to the various funding agencies, but due to the pandemic, everything is virtual this year.

“Being a part of this group is really exciting,” Skellam says. “There are so many different avenues of funding, and you get confident with talking about your research. It’s also interesting to see what else is happening at UNT.”