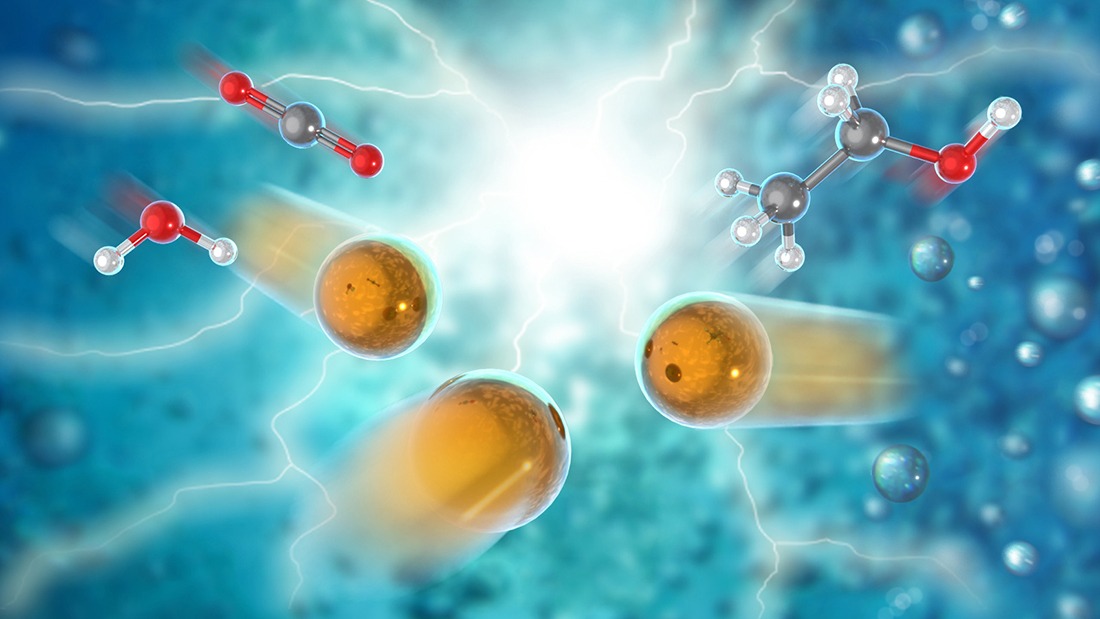 Artistic rendering of electrocatalytic process for conversion of carbon dioxide and water into ethanol. (Image by Argonne National Laboratory.)

Chemistry professor Shengqian Ma will spearhead the development of an industrial direct-air carbon dioxide capture module as part of a $2 million, three-year project for the U.S. Department of Energy to develop a prototype low-cost system for capturing carbon dioxide waste from manufacturing emissions and cleanly converting it into ethanol.

“To avoid emission into the atmosphere, the generated carbon dioxide will be trapped by our direct-air capture module containing a metal-organic framework adsorbent and will then be supplied to an integrated carbon dioxide low-temperature electrolyzer for conversion to ethanol,” says Ma, Welch Chair in the Department of Chemistry at UNT and a former Director’s Postdoctoral Fellow at Argonne.

The project expands on the discovery of a new electrocatalyst that converts carbon dioxide and water into ethanol with very high energy efficiency, high selectivity for the desired final product and low cost. A report on the discovery was published in the July 27, 2020 issue of Nature Energy.

The team’s electrocatalyst uses dispersed copper on a carbon-powder support to break down carbon dioxide and water molecules and selectively reassembles the broken pieces into ethanol under an external electric field. The electrocatalytic selectivity, or “Faradaic efficiency,” of the process is over 90%, much higher than any other reported process. Additionally, the catalyst operates stably over extended operation at low voltage.

While UNT develops the capture module, the other members of the team will develop the electrolyzer system. The goal is to integrate both components to create a prototype that could be scaled up and used to achieve carbon-neutral, or even carbon-negative, manufacturing. The technology will be designed to be adaptable to various manufacturing settings, such as ethanol manufacturers, thermal power plants and steel and cement producers.

“The process resulting from our catalyst would contribute to the circular carbon economy, which entails the reuse of carbon dioxide,” says Di-Jia Liu, a senior chemist in Argonne’s Chemical Sciences and Engineering division and a UChicago CASE senior scientist in the Pritzker School of Molecular Engineering, University of Chicago. This process would do so by electrochemically treating the carbon dixoide generated from industrial processes.

Greenhouse gases from industrial and other human activities are the most significant driver of observed climate change since the mid-20th century, according to the U.S. Environmental Protection Agency. Carbon dioxide makes up 81% of U.S. greenhouse gas emissions.

“Our long-term vision is for a cleaner and sustainable planet. If we develop a successful prototype, it will be a step toward a more sustainable future,” Xu says. “The intent of our prototype will be to intercept carbon dioxide before it’s emitted into the atmosphere and convert it back to fuel. It’s possible we might even be able to capture more carbon dioxide from the environment than has been emitted through manufacturing processes. Ideally, we would use renewable solar and wind energy to then convert carbon dioxide into ethanol.”

Ethanol is a particularly desirable commodity because it is an ingredient in nearly all U.S. gasoline and is widely used as an intermediate product in the chemical, pharmaceutical and cosmetics industries.

The team of researchers expect to have a prototype developed in three years.