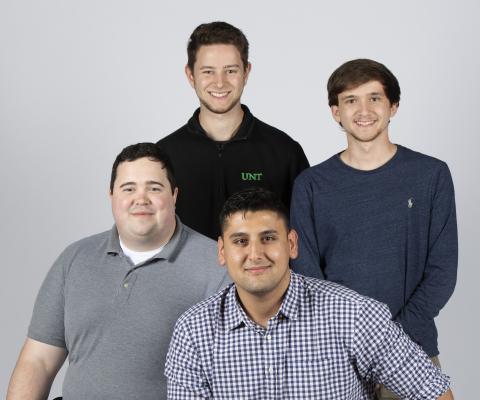 During their time as undergraduates at UNT, David Woodward (’20), Juan Ruiz (’20), Tim Stern (’20) and Nickolas Bratsch (’20), who earned degrees this spring, proved that one small step toward the unknown could result in a giant leap for the future of spacesuit user interface technologies. The computer science and engineering alums formed a team that developed an augmented reality program for space helmets as part of the NASA Spacesuit User Interface Technologies for Students (SUITS) Design Challenge. Their program provides real-time visual communication — anything from suit status, biometrics, checklists, detailed instructions and even pictures — via an astronaut’s helmet visor. This spring, they created a glove that sent a live camera feed directly to the headset as part of their senior design project. They also added a second live camera feed from the back of the helmet, which they called the “rearview cam.”