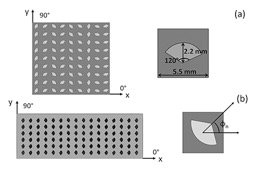 UNT researchers are gaining the attention of the physics world with their discoveries that could lead to new methods of mechanically reflecting sounds or other vibrations, such as earthquakes. Potential applications of their acoustic shield range from removing traffic noise to enabling interception-free private communication to protecting buildings from earthquakes, tsunamis or ultrasonic attacks.

The technology uses phononic crystals made of aluminum rods embedded in water and symmetrically arranged. They can be rotated to completely reflect waves, including sound. These crystals have been studied for their use in transmitting and reflecting sound, but only across a narrow range of frequencies and only with moderate amounts of control. Researchers from the UNT Department of Physics are demonstrating that phononic crystals that are partially submerged in fluid, can be used for reflecting sound almost completely by rotating them randomly instead of keeping them in an ordered pattern.

The crystals can be arranged so that sound will pass through normally up to a certain level, but when reaching a threshold, will be reflected. This will allow for almost 100% control of noise acoustically.

“This crystal will act to cut off the sound,” Arup Neogi, Distinguished Research Professor of Physics, says. “When it is weak, noise passes through, but if the noise becomes loud, like a bang, then this crystal will not pass it through.”

The cylinders could surround a space where the sound or vibration is unwanted. Inside the structure, sound would be “localized” or “delocalized,” depending on how the crystals are rotated. This means a person in the middle will hear less or nothing at all, depending on the desired effect.

Their research, recently published and chosen as an editor’s pick in the Journal of Applied Physics, proves that it is possible to create a device that is tunable to different frequencies with strong localization, also known as Anderson localization, by using disordered — or random — placement of the rods. Other related research from the team was recently published in Proceedings of the Royal Society A and Physical Review Research.

Sound wavelengths of audible sound in air are a few meters long, so the crystals will work optimally in large spaces, not indoors as in a classroom. Researchers say a device would be ideal in outdoor spaces like parks or neighborhoods to block sound from traffic or other sources of noise.

“It’s really noisy in the city and you could have the rods placed in areas where you want it to be quiet. Earlier in the day if you want to hear the birds, you would have them all arranged in a pattern. Then when traffic hits in the evening, you could reorient the rods just by turning them, and they would reflect the sound,” says Ezekiel Walker, 2014 UNT graduate and co-founder of the Denton startup Echonovus, Inc., and a co-principal investigator on the project.

The crystals also could be used to protect structures from other types of waves, such as the sonic waves that were used to attack the U.S. embassies in Cuba and other countries a few years ago. The rods could be designed to rotate and adjust to different frequencies as they change.

Walker, whose company owns joint patents with the university for some of the technology involved, sees potential for even more interesting uses in the future.

“Some of the most exciting applications include earthquake waves in the crust,” Walker says. “If you could reorient the rods quickly enough, you could help protect cities from vibrations passing through the structure. You could rotate rods to protect buildings or cities or things of that nature.”

None of this design uses electronics. These are mechanical devices, which means sound can be transmitted or reflected without any signal to be intercepted.

“This localization or anti-localization is a way to actually physically encrypt signals so that you can communicate without somebody being able to intercept,” Walker says. “This concept is something that we're working on right now.”

The researchers envision a technology that could be used to allow private communication across distances without electronics, which could have any number of applications.

Expect more sound and mind-bending research from this collaborative team, which is supported through the National Science Foundation’s Emerging Frontiers in Research and Innovation program.