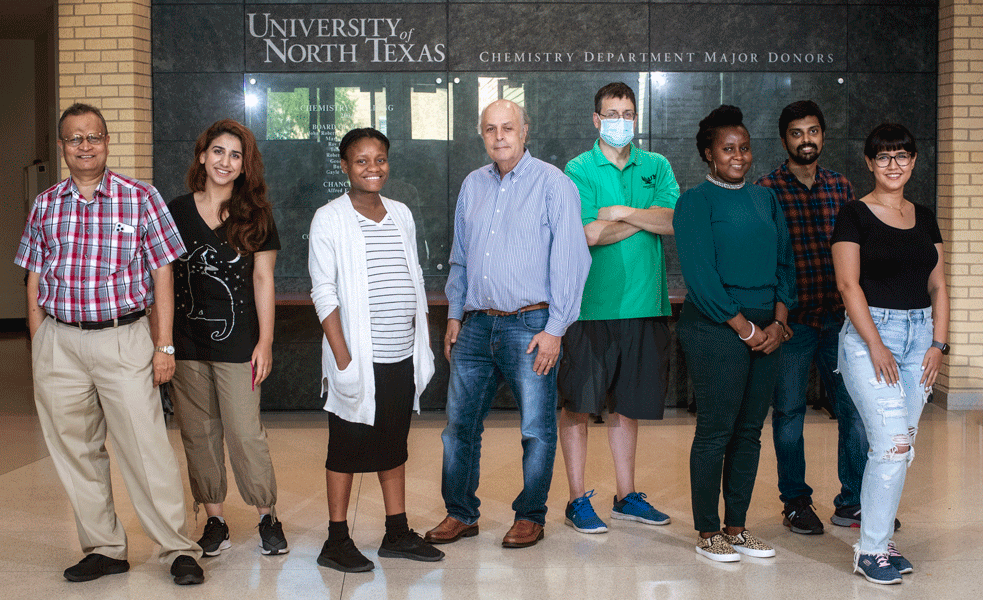 Ammonia production is vital to agriculture but is currently produced by an energy-intensive process that produces large amounts of carbon dioxide. The National Science Foundation is funding a team of researchers at UNT who are looking for fundamental insights that they hope will one day revolutionize how ammonia is produced, leading to significant environmental impacts and economic benefits for farmers and cost of some foods.

Ammonia currently is produced by reacting molecular nitrogen with hydrogen using a process known as Haber-Bosch, which takes place at high temperatures, and is very energy intensive and produces a lot of carbon dioxide.

“In fact, the production of ammonia is responsible for almost 2% of the world's annual energy consumption,” says Kelber.

The team is examining electrocatalysis — an environmentally friendly alternative that uses less energy — for the production of ammonia. Electrocatalysis is a specialized field of chemistry that involves chemically modified electrode as a catalyst in solution.  This collaborative effort is working on the science needed to make it feasible to produce ammonia at this complex electrolyte/solid interface.

“Over the last 40 years, tremendous progress has been made in understanding the fundamentals of reactions at the gas-solid interface,” Kelber says. “Those techniques, for the most part, don’t operate well at the liquid-solid interface because photoelectrons don’t escape under ordinary conditions.”

Kelber, Cundari and D’Souza say there is a tremendous interest worldwide in nitrogen reduction through electrocatalysis, so they wrote a research proposal using their combined expertise to look at the fundamental chemistry from multiple perspectives.

“Plenty of people have looked at this process, but not from this fundamental, interdisciplinary point of view,” Kelber says. “That’s what attracted the NSF.”

Their project leverages the expertise of all three researchers. They will combine theory from Cundari’s computational chemistry lab with electrochemical and gas chromatography measurements taken in D’Souza’s lab and surface science studies in Kelber’s lab. Students are working collaboratively across the groups, which expands their ability to make connections and be exposed to interdisciplinary areas of chemistry.

“The strength of this proposal was the integration of the expertise from the three different groups as well as all the opportunities this provides for the students to get cross-training in these state-of-the-art methods,” Cundari says.

This is one step toward a future technology that would allow farmers to make their own ammonia efficiently on their own land. The first phase is examining how the reactivity of the nitrogen changes with the type of materials used, looking for a catalyst with very high efficiency.

“Right now, we are in the very beginning stage. In the next phase, we will need to bring in nanotechnology to upscale this and make it better,” D’Souza says. “The third phase is to develop a prototype device that can make ammonia by just using sunlight, water and atmospheric nitrogen.”

The discoveries of the chemists also could have implications beyond environmental impacts.

“This technology is very sustainable and doable. It can be used worldwide, but the big picture is free ammonia for the one-time cost of the device,” D’Souza says. “Cheaper fertilizer means the cost of food will be much lower. You could have a steak for half the price.”