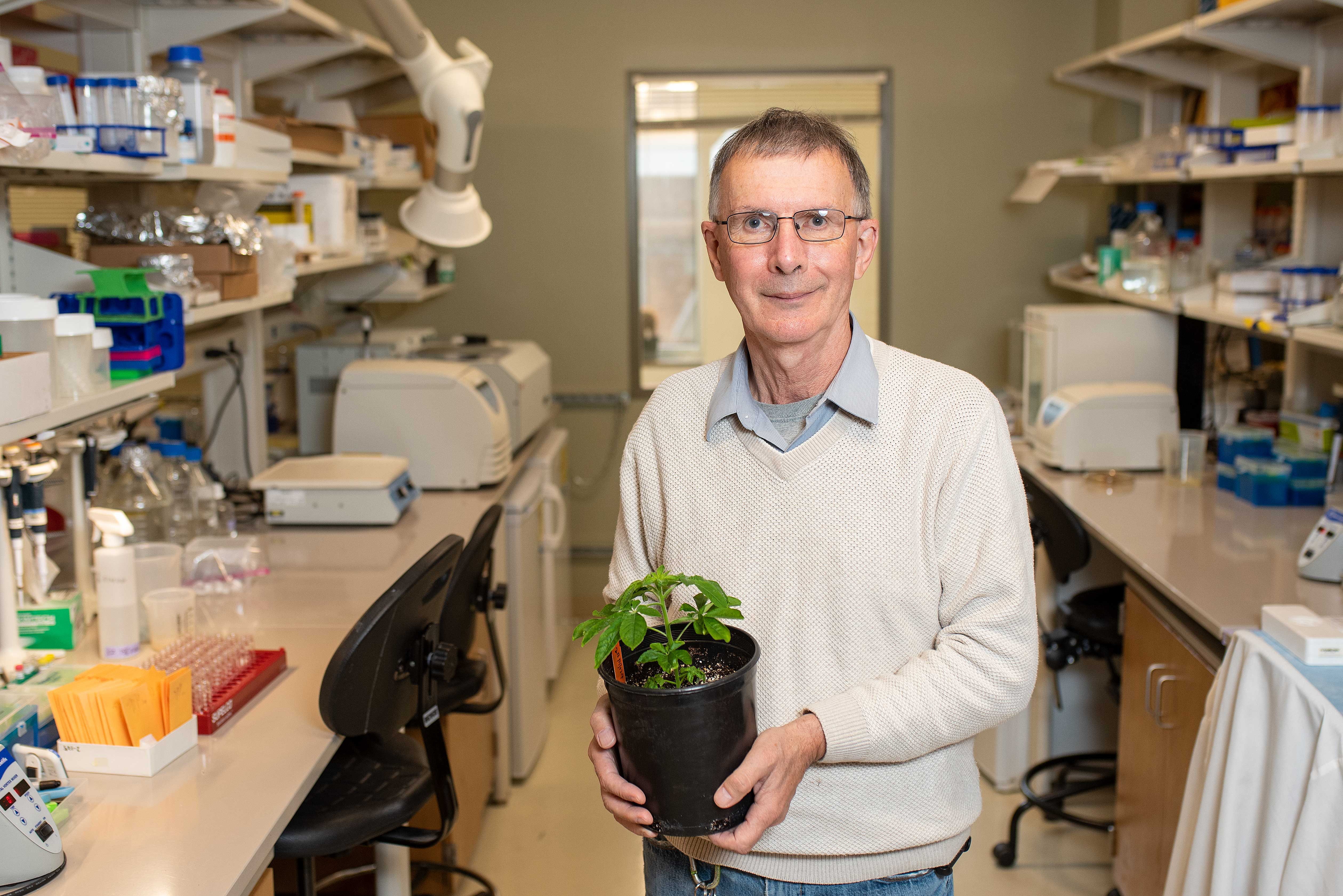 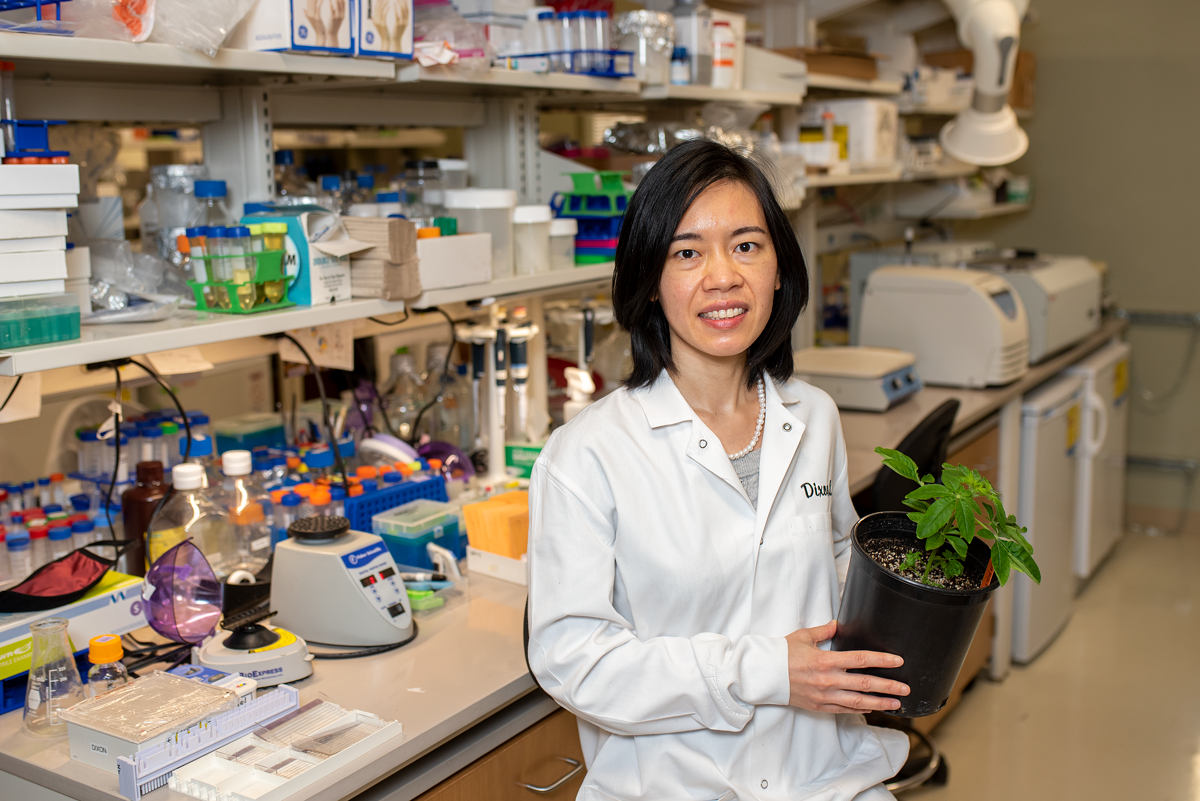 Researchers in Richard Dixon’s lab have been studying C-lignin, a type of fiber in the seed coats of certain exotic plants, since his team member Fang Chen discovered it in 2011. Helping plants produce C-lignin could lead to crops that are useful for creating an economically feasible plant-based jet fuel, among other applications. The latest findings from Dixon’s lab at UNT’s BioDiscovery Institute, published in the journal Science Advances, could help plant scientists get one step closer to that goal.

Lignin is the substance that makes plants woody and firm, making them stand upright. It contains building blocks that can be converted to biofuel, but the lignin found in most plants, a complex mixture of mainly G- and S-lignins, is difficult to process. C-lignin, found in the seed coats of plants such as cleome — also known as spider flower, has a molecular structure that is simpler to process, leading to higher-yields of breakdown products that can be converted to biofuels. Dixon and fellow researchers hope to engineer crops such as switchgrass or poplar to contain C-lignin instead of G/S-lignin — in the stems and leaves — so they could be grown as biomass crops that would be easy to process, leading to a sustainable bioeconomy for products such as jet fuel or other industrial products such as plastics.

The research is conducted in collaboration with Oak Ridge National Laboratory’s Center for Bioenergy Innovation, funded by the U.S. Department of Energy. Chen is the co-principal investigator on the project. It is part of the biotechnology industry’s goal to genetically modify crops to be more efficiently processed into valuable products and reduce the dependence on petroleum.

“How do you make C-lignin in a plant that doesn’t normally make it?” says Dixon, Distinguished Research Professor of biological sciences. “We’ve been approaching this in two ways. One of them is sort of trial and error and making some guesses — putting it in the plants that don’t naturally make it and seeing what happens. The other is trying to really understand how C-lignin is made in a plant that does naturally make it.”

Chunliu Zhuo, a postdoctoral scholar in Dixon’s lab, recently made a new discovery about how plants make C-lignin. Cleome makes G-lignin in its seed coats for about the first 12-14 days after pollination. Then it switches to making only C-lignin.

“You would imagine if cleome is switching from G-lignin to C-lignin at some point it might make mixed GC-lignin,” Dixon says. “It doesn’t. It’s pretty remarkable. It just switches completely.”

The building blocks for both types of lignin are still in the plants, but they don’t both connect to make the chains of lignin — a process known as polymerization. They are floating around in the cells but not binding together to make G/C-lignin.

The researchers expected there to be a complicated process happening in the plant involving enzymes and multiple steps, but since the switch seems to be so sudden and so complete, they now think the process is actually much simpler than they previously thought.

“Since it happens all at once, and C-lignin has evolved recently in many plant species,” Dixon adds, “it means it has to be simple.”

The fact that C-lignin is found in unrelated plants in nature tells them something about the evolution of those plants and perhaps how researchers might introduce C-lignin into new plants.

“It’s not as though 100 million years or 200 million years ago plants suddenly evolved C-lignin and now they all have it. It’s that some have it, and some don’t, even if they are closely related species” Dixon says. “Chunliu has discovered that as soon as the plant makes the C building blocks, the conversion of the G building blocks into lignin is going to be inhibited.”

They speculate that C building blocks work to prevent the formation of chains containing G building blocks. In understanding this mechanism, Zhuo, Chen and Dixon are one step closer to developing crops with primarily C-lignin. If the process is that simple, then engineering it may be simpler than they thought. They would only have to introduce genes that turn on C-lignin, not turn it on and then inhibit the G-lignin, which is what they originally expected.

Dixon hopes this latest discovery will point others at the Center for Bioenergy Innovation or other labs toward solving this problem.

The BioDiscovery Institute, one of UNT’s four institutes of research excellence, delivers solutions to underpin the utilization of plants, forest products and other biomass for production of biopolymers, new bio-based materials for construction and transportation, biofuels, and bioactive small molecules with applications in both agriculture and health care.

The Center for Bioenergy Innovation at Oak Ridge National Laboratory is one of four Department of Energy Bioenergy Research Centers focused on advancing biofuels and bioproducts for a vibrant domestic bioeconomy. The center is accelerating the development of bioenergy-relevant plants and microbes to enable production of drop-in sustainable aviation fuel, bioproducts that sequester carbon and sustainable replacements for plastics and other environmentally harmful products.