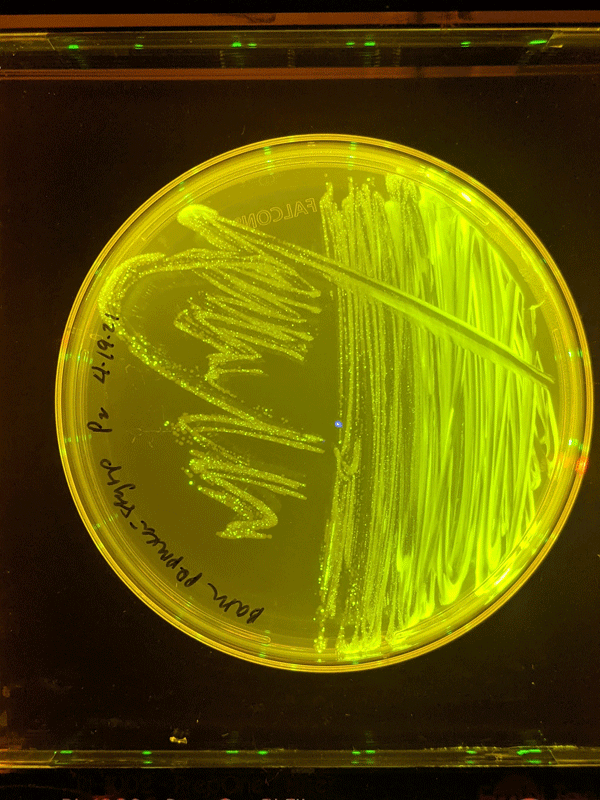 Methanotrophic bacteria expressing the green fluorescent protein, which is derived from both methane and carbon dioxide.

In 2019, Calvin Henard transitioned from a researcher at the National Renewable Energy Lab in Colorado back to his home state of Texas, where he joined UNT’s Department of Biological Sciences as an assistant professor and a researcher at the BioDiscovery Institute.

“I’ve always wanted to have my own lab and teach, so when I was doing my postdoctoral training, I decided I wanted to move into academia,” Henard says. “I also wanted to move back to Texas, so UNT luckily fit that bill and brought me back home.”

His research and teaching center around microbiology, and the main focus of his lab is to use methanotrophic bacteria to convert methane gas into bioplastics, biofuels and other valuable products, rather than allow it to be released into the atmosphere.

“Methanotrophic bacteria play a really important role in the carbon cycle on earth, since they are the only organisms that are able to use atmospheric methane. They actually eat about 10% to 15% of methane in the atmosphere,” Henard says. “The real focus of the lab is to leverage these organisms to mitigate atmospheric greenhouse gases.”

Henard received his bachelor’s degree in molecular biology from Tarleton State University and his doctorate in microbiology from the University of Colorado Anschutz Medical Campus. He went on to work as an NIH Ruth L. Kirschstein postdoctoral trainee at the University of Texas Medical Branch, and in 2014, he joined the National Renewable Energy Laboratory.

While working at the National Renewable Energy Laboratory, he began research evaluating the role in methanotrophic bacteria of the enzyme RubisCO, an enzyme also found in plants that is responsible for the majority of carbon dioxide utilization on Earth. Henard has continued his research in his laboratory at UNT, which was recently published in the journal Applied and Environmental Microbiology and chosen by its editors as a spotlight article.

Through this research, Henard and his lab learned that some methanotrophs consume carbon dioxide in addition to methane.

“Some methanotrophs, including this organism, use both methane and carbon dioxide, and there could be a lot more of these types of dual methane/carbon dioxide-utilizing organisms in the environment, but they haven’t been looked for yet,” Henard says.

Henard speculates that it’s highly likely these bacteria are consuming methane and carbon dioxide in the soil. He just needs to provide experimental evidence that the co-consumption of these gases is already occurring in the environment. His research so far serves as a benchmark in that this metabolism exists, and now researchers, including himself, can build off of this in order to find new ways simultaneously to convert the two most abundant greenhouse gases into products using methanotrophic bacteria.

“Our goal is to simultaneously utilize and mitigate greenhouse gases in a single, sustainable process that converts them to valuable chemicals,” Henard says. “We could make products from methane and carbon dioxide that would normally be derived from petroleum. It’s a dual route to help the planet and have a sustainable bioeconomy.”