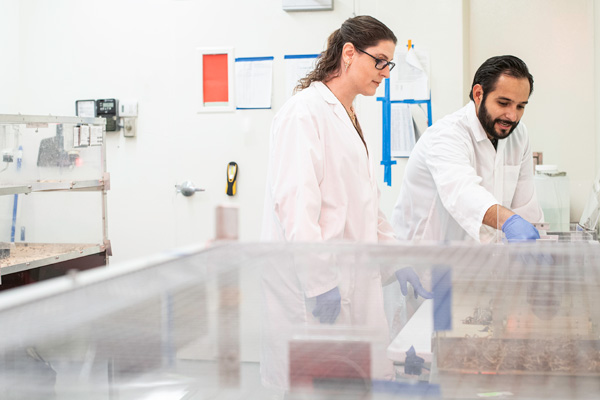 The University of North Texas is among 20 of the nation's top research universities that today announced the formation of the Alliance of Hispanic Serving Research Universities to increase opportunity for those historically underserved by higher education.

The HSRU Alliance aims to achieve two key goals by 2030:

"As a Hispanic-Serving Institution deeply dedicated to helping all students thrive, UNT is proud to be part of a group that is focused on creating access and equity for our Hispanic students," UNT President Neal Smatresk said. "In addition to increasing the number of enrolled Hispanic doctoral students, we also are committed to growing a diverse faculty that more closely resembles our student demographics and is best suited to help facilitate our students' aspirations."

The 20 founding universities represent every university that has been both categorized as R1 (very high research activity) by the Carnegie Classification of Institutions of Higher Education and designated as a Hispanic-Serving Institution by the U.S. Department of Education.

"Hispanics are the largest minority group in the United States and are now 17% of the workforce, yet they continue to be underrepresented in higher education. No group is better positioned than we are to expand the pathway to opportunity," said Heather Wilson, president of The University of Texas at El Paso and Chair of the Alliance. "We believe we are stronger together than as individual institutions acting alone."

The Alliance universities are engaged in thousands of research projects in the arts and humanities, STEM, health sciences, social sciences and other fields with world-changing outcomes. In 2019-20, Alliance universities produced 11,027 doctoral graduates, of which 13% (1,451) were Hispanic.

Prior to the formal announcement of the HRSU Alliance, the universities began working together on several initiatives. The first project, funded by a $5 million grant from the Mellon Foundation, will conduct cross-regional research and train doctoral students in Latinx humanities. A second initiative, funded by the National Science Foundation, expands opportunities for Hispanic students in computer science.

The Alliance began during the pandemic through conversations and distance-enabled meetings among presidents and chancellors, as well as faculty and administrators coordinated by the University of Illinois Chicago. The effort took hold and grew into a determination to formalize the relationship announced today.

Universities in the Alliance include:

For more information on the Alliance of Hispanic-Serving Research Universities, visit: HSRU.org.