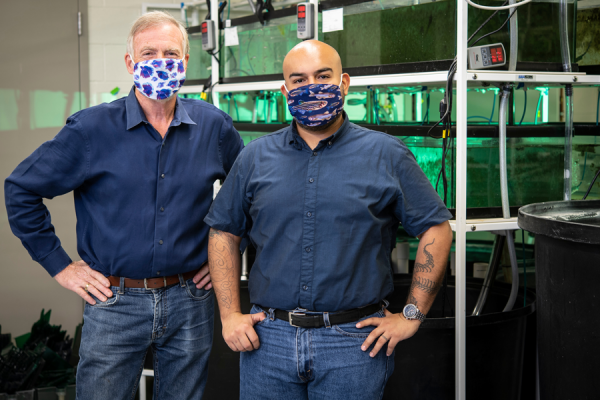 Researchers in UNT’s Department of Biological Sciences have received a new $1.15 million, four-year grant from the National Science Foundation to study how animals experiencing low oxygen (‘hypoxia’) can pass on survival traits to their offspring without changes in their genes. They are exploring a burgeoning and poorly understood field called epigenetics, the study of how the expression of genetic traits can be altered without the DNA itself being changed.

“The cool thing about epigenetics is that, unlike when a mutation to a gene occurs, animals and their offspring aren’t stuck with the consequences of the new variations of the gene forever,” says Warren Burggren, University Distinguished Research Professor. “Instead, if environmental conditions get better, they can revert to the ‘normal’ pattern of their biology because their genes – only how their genes functioned – were never changed in the first place.”

Research shows that these changes in gene expression can be passed on to successive generations without any mutations of genes themselves. For example, research in humans shows that grandchildren can be more susceptible to heart disease due to the diet of their grandparents (but not their parents!).

“Everyone knows that your genetic makeup contributes to your characteristics. How that genetic makeup is expressed also can be transmitted to the next generation without any of the DNA changing,” says Pamela Padilla, dean of the College of Science. “The question we have is how many generations can have that sort of memory.”

Burggren and Padilla are studying how this happens by examining an example of animals adapting to climate change. One of the major consequences of global warming for aquatic organisms is less oxygen available to them.

“If a lake suddenly becomes really hypoxic and there’s an algal bloom there, it’s possible that some of the fish could survive this not because they have gene mutations, but because their gene expression has changed in a way that allows them to survive that hypoxia,” Burggren says.

The team is looking at how the mechanisms that help fish survive these conditions could be passed on to subsequent generations. The short life-cycle of zebrafish will allow them to study several generations in a short period of time.

“We are using UNT’s world-class zebrafish facility to house many populations of zebrafish to follow how certain traits helping fish survive in hypoxia are actually inherited – by ‘genetics’ or by ‘epigenetics,’” Burggren says adding that the fish will be exposed to lower oxygen and they’ll then examine the different generations and what changes are helping them to survive.

“Are they making bigger gills? Are they breathing more frequently? Is their blood enriched with hemoglobin?” Burggren says. “Then we’ll breed their offspring, and we’ll look at their offspring to see if the ‘grandchildren’ have similar traits.”

Padilla will study the cell biology and genetics of how hypoxia intolerance is inherited. She has previously researched HIF-1, hypoxia-inducing factor, in the nematode worm C. elegans.

“HIF-1 is really important in adaptations and its role in diseases,” she says.

There are some real human applications. However more broadly, they’re using zebrafish as an animal model and using the tolerance to low oxygen as a model stressor to prove a concept – how epigenetics could be passed from generation to generation in all organisms.

“When we finish this project, we will have shown some new ways that animals, plants and microbes can actually transmit characteristics to their offspring across multiple generations.” Burggren says. “This is not a new discovery, but we will have documented important nuanced and subtle aspects of epigenetics that have not really been quantified before.”

They’re not looking at mutations, rather gene expression alterations caused by gene methylation, the addition of a chemical group to the DNA. It reduces the gene expression by blocking the proteins that attach to DNA and “read” the gene.

“Interestingly enough, if a gene is methylated, the chances of it experiencing a mutation can be quite a bit higher,” Burggren says. “This is one possible mechanism by which short-term, two- and three-generation changes that we’re interested in could actually become permanent. That’s been kind of a missing link in terms of us understanding how epigenetics could play into evolution.”

“People talk less often about the epigenetics of survival. We just want to prove the concept that something that is helpful in terms of the animal surviving a significant environmental stress can be epigenetically passed on to their offspring across multiple generations,” Burggren says. “If that’s the case, then others can take that as a springboard and start looking at temperature, at pollution, at all of these sorts of things.”

The study is likely to have significant long-term implications for science, but Burggren and Padilla are equally interested in the impact it will have on students. Fully integrated in the research will be transformative, international research experiences for ethnically diverse undergraduate, graduate and post-doc trainees. The project will be an international collaboration with researchers and students at two universities in Mexico, Universidad Autónoma del Estado de México (UAEM) and Universidad Juárez Autónoma de Tabasco (UJAT). UAEM is in Toluca, Mexico, one of the highest large cities in the world. With altitudes between 9,000 and 12,000 feet and only 70% of the oxygen levels of sea-level, it is a natural laboratory for studying hypoxia.

“Anytime you bring in scientists from diverse backgrounds, that’s important,” Padilla says. “Our program will provide a merged scientific and cultural experience that creates in trainees a first-hand knowledge of the global reach of life science research as well as different cultural perspectives of the science experience.”