UNT unravels a secret of the desert southwest

UNT unravels a secret of the desert southwest 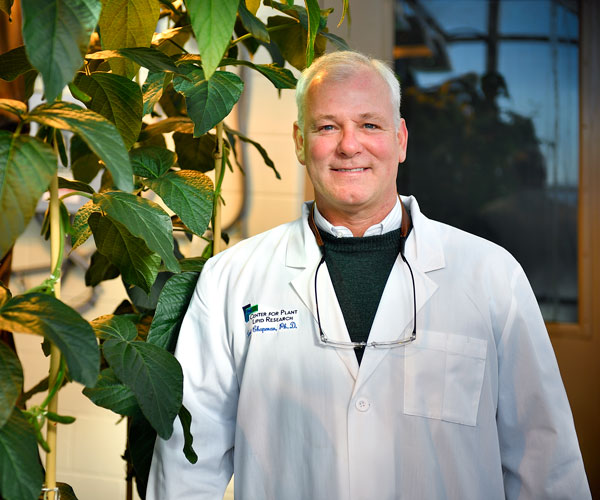 Researchers at UNT, in conjunction with scientists at the Huazhong Agricultural University in Wuhan, China, recently developed a complete map for the genome of the jojoba tree. This is the first complete DNA sequence of Simmondsia chinensis, providing a blueprint for this drought-tolerant and wax-bearing desert shrub.

“Jojoba is expensive and difficult to grow. It requires an arid environment and is not grown as a row crop. It is raised in orchards which makes it harder to harvest than other oilseed crops,” says Kent Chapman, a Regents Professor and director of the BioDiscovery Institute at UNT. “Now, with our map, scientists can find the desired genes in jojoba and express them through other plants.”

Jojoba is a sustainable plant source of wax esters, a major ingredient in cosmetics and skin care products because it supports moisture retention in human skin. It can also be found in shampoo and soaps. It makes an excellent industrial lubricant due to its stability under high temperatures and pressures as well as its antirust properties. It is made up of high energy molecules which also has caught the interest of the biofuels industry.

“The jojoba seeds contain 60 percent wax esters, while other oil-rich seeds like soy or canola contain almost none. Imagine if we could take the specific wax-producing genes we want from the jojoba tree, and put them into a more easily grown seed oil crop like canola,” says Chapman. “Suddenly, we have a row crop that is easy to grow, doesn’t need a specialized environment and can be harvested using general farming practices. This would be a boon to a number of industries.”

Chapman, Ling-Ling Chen and Liang Guo, both with Huazhong Agricultural University, were co-principal investigators on this project and together, along with other researchers, authored a paper, "The genome of jojoba (Simmondsia chinensis): A taxonomically isolated species that directs wax ester accumulation in its seeds," that was published in the March 11, 2020, issue of Science Advances, a journal of the American Association for the Advancement of Science.

This research was funded in part by the U.S. Department of Energy Office of Science Physical Biosciences program and took two years to complete.